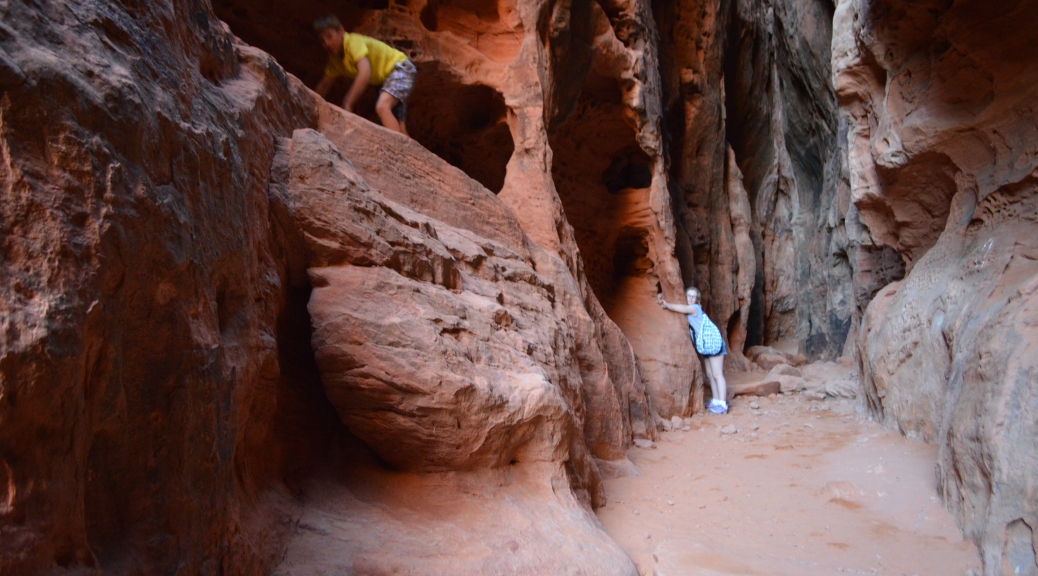 We drove up from Vegas as if we were fleeing the city. We were, in fact, escaping the buffet of desperate folly at the center of the city. It took us hours to get out of town: stops to buy a cooler, to get groceries, pump gas, eat bagels. It was endless, and as we turned, finally, onto Hwy 15 North, we breathed a collective sigh of relief.

We had flown into Vegas because it is relatively cheap. We were interested in accessing the Grand Staircase, as they call it, in Southern Utah – a patchwork of national parks that protects nearly half the state from private use. Now, after a one-day recoup in Vegas, we were headed towards what we came for – whatever it might look like. We had a room booked in St. George, a sleepy retirement town that the guidebook had described as “a good jumping off point for Zion”. The rates were good and there was a pool. It looked as if we might make it there by three o-clock check in.

Adam and I were in a state of perpetual wonder, yelling, “look out the window!” to the backseat every ten minutes. Then we realized if we rolled down the window, suddenly, it scared them into attention. The mountains at first were distant, a muddy red, and the landscape was definitely desert. Cacti we wanted to believe were Joshua Trees sprang up out of the dust. There were sad looking casinos at random intervals, and then, briefly, we were in Arizona and we began to climb, and wind our way through the Virgin River Gorge. It’s a spectacular 20 mile drive carved through striated cliffs that is allegedly one of the most expensive highway projects ever completed. You begin to see the first hints of the Utah sandstone, and the cracked monumental stone that typifies Zion. It’s the place where the topology of the Mojave gives way to the insanity of the Colorado Plateau.

When we arrived in St George, there was a race finish line set up in our hotel’s carport. It was the finish of a 400 mile bike ride. While I found this at least a little intimidating, I also thought it a bit crazy, a bit excessive. We were pleased to see a quartet of German tourists outfitted with Harleys, in full leathers, bandanas and Harley Davidson t-shirts also staying at our hotel. We unpacked and I exiled the children to wander the hotel while Adam and I napped. It was too late, we decided, to make it to Zion, but it was a Sunday, and we would hike, dammit.

The author of our guidebook harbored intense disdain for St. George, saying, “to find anything that might interest you, you have to leave St. George and head 20 miles northwest to Snow Canyon Sate Park”. Well, good.

We paid for a day pass and collected a trail map. The very first trailhead promised a short hike ending in a small slot canyon, Jenny’s Canyon, it turned out. Taking our first steps into the fine red sand of the Utah desert was a queer thing. Such a different terrain than we had grown accustomed to. And rather than a trail winding through a corridor of trees, the desert and the sky spread out on all sides, giving you an unobstructed view of the horizon line nearly all the time. Ivan stopped to sift the sand through his fingers, and Veronica walked confidently ahead of the us, undaunted. How wonderfully bold children are. I was unnerved by the landscape, and overly-awed by the orange of the rock, the blue of the sky, the dryness of the air. I took photos and ambled along.

The slot canyon was cool inside, and had good outcroppings for climbing. We also found a good spot to shout and hear our voices echo off the walls of the cliffs. After messing around for a while, we headed back to the car. We drove another mile or so to a trailhead marked Petrified Sand Dunes. And so they were. The rich red sand Ivan had let run through his fingers was here frozen into rolling mounds of variegated rock. A short trail led into the slick rock where you could easily climb, and scramble if necessary, as far as the eye could see. Eventually, we crossed a rise with a small, steep canyon on the backside. The sun was setting, and the wind was arid and steady. The only family we had passed in the parking area were out of sight, so we were quite alone up there. Adam sat to meditate, and so we sat, Veronica and Ivan and I, looking down on the canyon filled with sage and Juniper trees. A blue scrub jay swooped into the canyon and disappeared amongst the trees. It took my breath away. I put my arms around the children and hoped they would remember this moment. It’s rare, but I felt for a moment, in bringing them to a place of such rare and splendid beauty, like a good mom. It was my favorite Sunday hike so far. 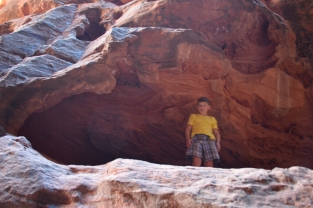 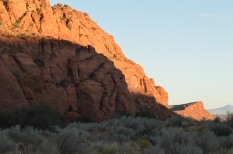 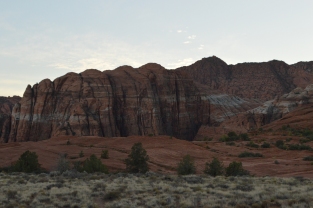 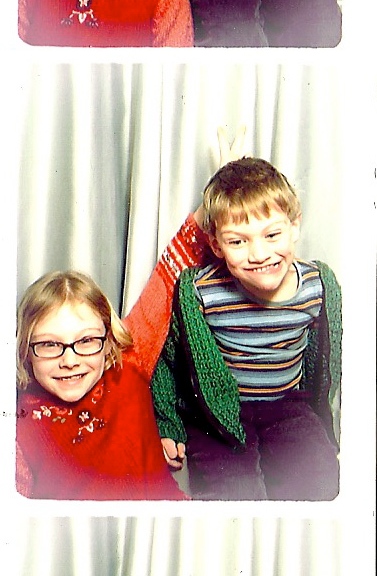 It is late February on Mars, and the atmosphere around here is tense, at best. The children are bored with their Christmas toys, mommy is broke and crabby, and the regular onslaught of snow and bitter cold continues. Worst of all, Ivan and Veronica alternate between fighting and fits of giggly hysteria, both of which drive me crazy.

Time for a playdate.

I do not like arranging for these meetings, because it is too much like real dating in that I tend towards becoming an insecure, anxious mess. So far, Ivan has been stood up twice by Jack, his friend from Montessori school. In both cases, Jack was sick, and in both cases, Ivan was absolutely heartbroken. This week it looks hopeful.

I am nervous because the playdate is here. Jack lives in Arden Hills (which sounds like a women’s perfume) or Falcon Heights (which sounds like a men’s cologne). We live in Frogtown (which if it were a perfume, you would not want to smell) in an “artist’s co-operative.” Our neighbors are the Hmong marketplace, and a crumbing green house with a very suspicious looking trailer parked on the lawn. I find these details delightful, but I worry that Jack’s mother, wreathed in the fragrant aura of the suburbs, will not. I can only hope that Jack returns home to say, “And they have a bike in the living room.” and not, “Ivan’s mom only smokes outside and only when she gets really upset.”

As for Veronica, I tried to make a playdate with her friend from school who, like all of my daughter’s school friends, has a name I can neither spell nor pronounce. It sounded to me like Ellipses, but that can’t be right. Veronica brought home a post-it note with her friend’s phone number, written in her seven-year old scrawl. I left a tentative message,

“Hello, this is Jennifer, Veronica’s mom, and I was calling to see if Ellipses would like to play this weekend. If this is, in fact, Elleepsies mom (and here I change the pronunciation slightly, in hopes I will eventually nail it), which I hope it is (nervous laugh). Okay, then, just call me, Veronica would love to see Ulllisspes.” Following this call, Veronica by turns harassed me and checked my phone for messages until I called and left another message, and finally, another on Saturday morning.

Elipses mom called me back around eleven on the Saturday of the would-be playdate.

“Hi!” Elipses mom brightly said, “Obviously a playdate isn’t going to work out today!!” Obviously? I wonder if she understands the meaning of the word, “Oh? That’s too bad.”

“Yes, well, we volunteer on weekends, so that’s probably not going to work out.” I’m impressed by this information, particularly that she cajoles a seven year old to spend all weekend volunteering.

“Weeknights are a little too hectic, I suppose.” I say, thinking of V’s wriggly little handwriting and hand-wringing.

“No, it will probably have to wait til summer.” Ellipses mom says definitively. “But we both really appreciate the offer!” I am pretty sure I am being snubbed, but can’t fathom why. How can my reputation preceed me at this school? How can anyone snub my adorable girl? I mouth the words ‘fuck off’ into the receiver, “Hmmkay, let’s touch base then.” I hang up and yell to Veronica, “You need to find a different friend at school for your playdate. Ellipses isn’t going to work out!”

I decide to plan a playdate for her and I while Jack is visiting. We will make cookies so the house will smell like vanilla when Jack’s mom comes to pick him up, and he will tell his mom, “Ivan’s mom makes the best cookies!” Volunteer that.