Grief is like ripples in a pond. In the beginning, the waves are intense and close together. The first week, your eyes are  permanently swollen from crying.  As soon as you stop, something happens that starts it all over again. You’re nauseous from the rocking of the boat, it’s so ceaseless and steady.

Then, as time passes, the waves grow more faint, and less intense.  It tends to surprise you, when you least expect it. Maybe you’re driving along in your car and hear a song, or a phrase, and there you are with fresh tears on your face. You might have to sit in the parking garage and cry a bit, but it feels almost good to grieve anew. To let the wave wash over you and recede, and find yourself still standing.

Finally, as the months roll by, you might go whole days without thinking about the person. That’s when they come to you in dreams, like a ripple so faint, their image a blur. You reach out to touch them and your hand meets air, and you wake up sad and longing, with a dry face.

I dreamt about Doug the other night. When I woke, I went to listen to one of his songs and hear his voice, and I found this, which I’d not heard before. His voice is so clear and gentle, and the words are so spare and lovely. It was a balm. So I made this video, which is silly, but it allowed me to spend some time with him.

Ponderous from Jennifer Kohnhorst on Vimeo.

Adam had assumed we weren’t going to go on our Sunday hike, as the kids were at their dad’s house. “You’re going!” I barked on Saturday night, “That’s the whole point! 52 hikes! We have to go!!” Still I was surprised when I asked him what his plans for the day were, and our hike was on the docket. It was sunny and steamy out, and we both had long to-do lists in the wings. In deference to these factors I chose a “hike” close by, a five-minute drive to a trail in Dale Villa Park that begins behind a supper club and winds its way towards Lake McCarrons, a little known urban lake in Saint Paul.

The trailhead behind the supper club, with its sign for BOOYA leaned up against the back wall, should have been warning enough. And as we descended the paved trail into the woods, the fetid smell of rotting vegetation should also have caused me to turn around. But once we were level with the slew, the scent receded. And we breathed through our mouths. I was optimistic as we walked through the vaulted tunnel of tall oaks.

And then, it was over. The trail dumped us into a residential cul-de-sac, with an overlook which looked over the algae covered source of stink. It seemed to me we had only walked about 10 minutes. And though you might think that reaching the end of this not-so-great trail might have been a relief, I was disappointed. Because whatever it was I needed from a hike that day, I had not gotten it. Meanwhile Adam was enjoying the scenery and talking to me about the difficulty of reconciling the passionate spiritual engagement of theism with the detachment of non-theistic religions or atheism.

We decided to follow an asphalt path that circles Lake McCarrons, and allows you to look at the driveways and garages of large houses. The path leads you up a large hill. While trudging up the hill you might become crabby. Because the hippie insect spray and your sweat might be forming an amphibious film on your face and arms. Also, you might grow weary of existential conversation at this time. Next you might start walking about 5 steps ahead of your boyfriend, in classic pissed-off-bitch style. At least that’s what I did.

We walked past the Roseville Armory and many varieties of backyard fences to a major intersection which turned out to be Rice Street, which I found extremely depressing, as it epitomizes vulgar urban claptrap, especially at it’s north end. I turned walked quickly back towards the trail, Adam following, both of us knowing that silence was our friend. The only good thing that happened was meeting a very beautiful white Pyrenees Mountain Dog named Titan, who looked hotter than me.

I don’t even have a photo, so filled with ire I was. Adam said he found the trail “delightful” and that he loved knowing about little urban “secret gardens”, which made me hate the trail more. It almost prompted me to say something like Sorry Adam. Next Sunday will be better.

I love potato salad. Some people don’t. While I don’t pretend to understand them, sometimes they must be catered to. After all, they have feelings too.

I make a few killer potato salads, frankly. For a while I was doing this yogurt dill thing with red potatoes, corn on the cob, sometimes radishes, little green peas. Or German Potato salad. Do you know why it tastes so good? Because you fry the onions in bacon fat. Seriously.

My grandmother made used to run a set of rental cabins along with a tavern she and my grandfather owned in Wausau, probably in the 1950’s. Mostly guys who worked as loggers, I think. According to my mother, each week she backed rye bread and laid it out to dry, crushed it into bread crumbs, and used it to coat fish for Friday fish fry. She served the fish with a side of German potato salad for some ridiculously low price like 55-cents. My grandmother, as I knew her, was a terrible cook, with the exception of apple crisp. But I like to think of her when I make potato salad. When I make German Potato salad, I never fuss with the recipe. I follow the Joy of cooking to the letter.

The Potato Salad for People Who Hate Potato Salad is actually called Tri-color Potato Salad and it is from one of my favorite cookbooks, the benignly named Prairie Home Cooking (no relation to the Companion). Despite the milque toast title, I love it, because it includes recipes of European settlers and immigrants of the midwest. The recipes are consistently great, and use local, seasonal ingredients, mostly, as they were the dishes of immigrants who were exploring with foods that were hardy enough to survive transplanting and thrive in their new homes. I’ve not made a clunker from it yet.

I used some teeny, tiny potatoes from Trader Joe’s, which I love, but red potatoes, as called for in the recipe, are fine. Make this, and you will make the haters happy.

Cook the potatoes in boiling water, and when they have about 5 minutes left, throw in the green beans. When all is tender, but still holding together, rinse and drain. Whisk together vinaigrette, adding parsley at the end. Put potatoes, green beans, tomatoes & onions in a bowl, pour the  vinaigrette over, toss and chill.

(since I’m printing without permission, I’ve left off most amounts. If you’d like the complete recipe you can find it. Or you can wing it, since the proportions are basically to taste.)

For our second hike we hit up the Tamarack Nature Center, and the trails in the prairies, woods and wetlands behind it. It was a nearly perfect day, sunny and breezy. The trails are lovely, but seem to be almost deliberately poorly marked. I’m not sure exactly what trails we took, or how long we walked.  We began to find “clues” scattered along the trail, leading us from place to place searching for what we imagined to be a treasure. The clues ran out, sadly and Ivan panicked about 45 minutes into the hike, thanks to two mosquito bites. But he did loved the Discovery Hollow play area afterwards. What a hidden gem this place is for parents of young children. We had a wonderful time. 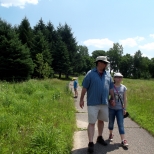 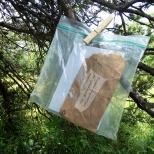 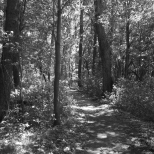 We’ve endeavored to hike every Sunday. Our crew is composed of two middle-aged,  out-of-shape, well-intentioned adults Adam (49) and myself (41), and our healthy, reluctant charges, Veronica (11) and Ivan (8). With our particular combination of ability and initiative, we are well suited to the generally flat, unassuming geology that abounds in Minnesota.

The forecast, and the sky, teased us with the threat of rain all morning. We hemmed and hawed, and finally decided to take a chance a little after noon. We decided on a “no-electronics” rule for the less than one-hour car ride. 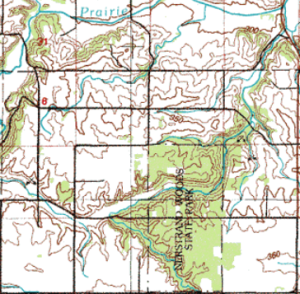 Veronica read manga and Ivan talked, sang, and complained pretty much continuously for most of the ride. We arrived at Big Woods, Adam bought us a new state parks sticker, and we headed to the parking lot/trailhead to set out, but not before dousing ourselves in bug spray, as the ranger had warned us they were ‘bad’.

The trail was rambling and lovely, deeply forested and dappled in sunlight, and there were wild raspberries for the taking. However the experience will forever be remembered as “the hell hike” for the 80% humidity and bugs so thick we fairly sprinted through the woods. To keep Ivan interested we devised a treasure hunt game, wherein point values were awarded for seeing certain bits of nature. This naturally led to obsessive searching and lots of arguing over the point values of disparate items like “weird trees” and “giant mushrooms”. Points were deducted for getting bugs up your nose.

Naturally, Ivan won the game, as he scored 100 points for keeping Adam from stepping in a patch of poison ivy. After the hike we went into Northfield for iced coffees, Veronica went to her first Ragstock, and we mused about the absurdity of olive oil stores. We drove back the long way, not on purpose, and wound up in East Saint Paul at El Burrito Mercado, a worthy reward for our fledgling efforts. We all slept like babies. 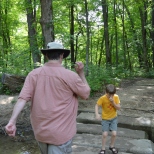 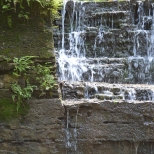 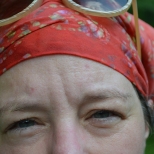