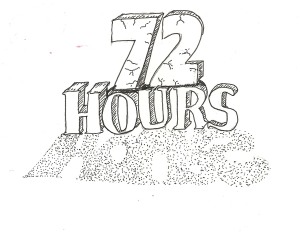 In the first 72 hours of smoking cessation: Symptoms of chemical withdrawal have peaked in intensity, including restlessness. The number of cue induced crave episodes experienced during any quitting day will peak for the “average” ex-user.

Hour 8: Before I am out of bed, I slide open the bedside drawer and pull a patch from the box. The cashier at Target forgot to charge me for them, so I feel karmically indebted to quit smoking. On top of a lot of other reasons. (it’s stupid, causes cancer, et cetera) 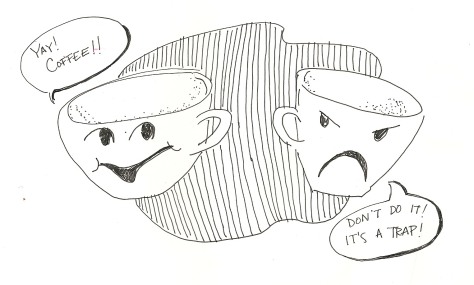 I descend into the pre-dawn light of the downstairs and quietly begin the morning rituals of coffee brewing. CAREFUL! COFFEE MIGHT BE A TRIGGER! says my brain. SHUT UP! also says my brain. I predict many future brain-to-brain conversations. The patch is shiny and transparent and my bicep itches.

The kids wake and within minutes they remember I have told them they can destroy what is left of my cigarettes. I film it with my camera, because I believe in making a public spectacle of my life. They are purposeful in their destruction. It seems like a waste of money, until I remind myself that cigarettes in and of themselves are a waste of money.

Hour 12 When my oldest friend unexpectedly calls, I tell her I am quitting today, and she tells me she is so proud of me. “Thanks.” I say, and my voice cracks. “It’s only noon!” she says despairingly, which makes me laugh and cry a little. I think it will be a long day. But these little patches are cunning and I feel resolved to stick it out. Plus, I don’t have any cigarettes. Damn.

Hour 17 I only lose my temper once, dramatically, in the Holiday parking lot. It has something to do with boots and dawdling I guess, but more to do with nicotine withdrawl and cabin fever. I say to Veronica, “You know, I am quitting smoking and it is really, really hard! Can you just give me a break today and cooperate?” She says, “well I don’t see what is so hard about it!” and I say, “Well, have you ever withdrawn from a chemically addictive substance VERONICA? HAVE YOU?” Yes I actually said that out loud to my 7 year old.  I thought to remind her of how she acted when I weaned her from breast milk – tantrums I tell you! – but thought better of it.

Hour 22 I carefully sew a bird patch on the knee of Veronica’s pants while I watch the Oscars, which are a total yawn. During every commercial break, I think for a split second that I should go have a cigarette before I go to bed. But I don’t have any. Damn.

Hour 34 My first real test comes as I run the gauntlet after dropping Ivan at Montessori; my first time alone in my car. A time I typically savor, free from parental obligations, window down letting in the arctic midwinter air, radio turned up loud and smoking my first cigarette of the day. This morning, as the car warms up, the smell of stale smoke is overwhelming and I feel nauseous. I grab a bottle of Rose Geranium I keep in the ashtray and inhale deeply. I look at the label on the side: BALANCING. COMFORTING. Indeed. 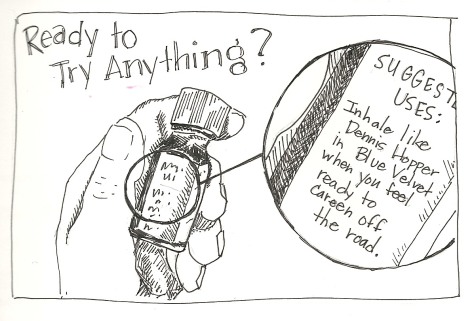 Hour 35 I have a lunch date in Minneapolis. I have a minor wardrobe crisis and begin a mantra that goes: Not smoking makes me pretty which I absolutely do not feel, but repeat nonetheless. Again with the car thing. But the sun is high, and I have gum. I turn up Florence and the Machine (from an album unironically entitled Lungs) and sing, well, scream actually, all the way to the restaurant.

Hour 37 – 39 I take breaks in the afternoon to play the trumpet happily along with Mission of Burma when I feel like smoking. “That’s when I reach for my revolver!!“ BLAT BLAT BLAT BLAT!!! It tires my lungs and amuses me. A friend texts me to remind me I have to bowl tonight, which is great, because I was dreading the night alone without the kids and my cigarettes. I have the second wardrobe crisis du jour and spontaneously cut my hair. If you have ever cut your own hair, you know that once you start, it is hard to stop. Luckily, I am running late, so I put the scissors down before it becomes tragic.

Hours 40-42 I bowl for shit, but this is not unusual. A woman in lane two sets a half smoked Marlboro next to her pack while she bowls. She is a thin Northeast Minneapolis spectre with a grey, wrinkled face and caved in cheeks. Not smoking makes me pretty. Thanks lady!

Hours 43 – 46 I had grand plans for writing and sewing and cooking tonight,  but when I get home I see the pile of hair next to the sink, the trumpet next to my desk, and the couch in front of the TV. I feel scared, so I lay down and watch terrible broadcast television. I call my friend who is also quitting and he makes me laugh so hard I choke, for which I am extremely grateful. I climb in bed and wait for my new age book to put me to sleep.

Hour 56 I realize that smoking has become the punctuation of my days, and it is for this reason that I miss it. Finish breakfast; comma smoke. Write proposal; period smoke. I’m bored; question mark smoke. When I’m drinking, it’s like: beer, comma, beer, question mark, beer, did I just smoke? Oh well, comma, comma, beer, beer.

I figure I need to find a new activity to punctuate the pivotal transitions in my day. Besides eating, which has become a long stream of consciousness monologue with my kitchen. I try sun salutations, and my friend suggested I run the stairs to get my chi going. Mostly though, I stand up and circle the apartment aimlessly every hour or so.

Hour 60 I find myself at Whole Foods around the noon hour buying ridiculously healthy foods (rainbow cale?). I feel ecstatic that I have driven here without losing my mind, and impulsively buy St. John’s Wort just in case. Just in case it gets harder. Just in case it might actually help. Just in case I forget for one minute that I am on day three of quitting smoking, I tell the cashier. She is nice about it.

The sun is shining and it is about forty degrees. I roll down the windows and drive half lost around St Paul, not entirely by accident. I sing along with Kate Pierson and imagine that my voice is already dramatically improved in range, and test this theory with abandon. Then, darkness falls.

Hour 64 Impulsively, I bake banana bread. Impulsively, I decide to go to Artemis’ house for American Idol and to gawk shamelessly at the Charlie Sheen debacle. I have to stop at my ex-husband’s house TRIGGER! to pick up school enrollment forms and my yoga mat. Veronica is having a meltdown for unclear, but surely not proportional, reasons. TRIGGER! I keep it short and civil (just like I learned in my court-ordered divorce class!) and get back in the car. TRIGGER!

At each possible point I make a wrong turn TRIGGER! but instead of telling me to backtrack, the GPS calmly urges me forward onto ever more unfamiliar roads. Cruising on my odd cocktail of nicotine patch and St Johns Wort, I calmly consider I would have likely smoked at least 3 cigarettes since leaving the house.  I pull into a gas station to pee.

I walk into the belly of the beast: convenience store. TRIGGER TRIGGER TRIGGER It would be convenient to buy a pack of cigarettes, smoke one, and throw the rest out the window. It would be super convenient to buy a pack, smoke three in quick succession and hide the rest under my seat. But it would also be incredibly disappointing and lame. So, instead I buy butterscotch discs and something approximating green tea. Back in the car, I pop in a butterscotch disc and think that it is the very best thing I have ever put in my mouth. I can’t believe they are legal, that is how good they are. Buttery warm nectar slides down my throat. I moan audibly and put the car in gear. 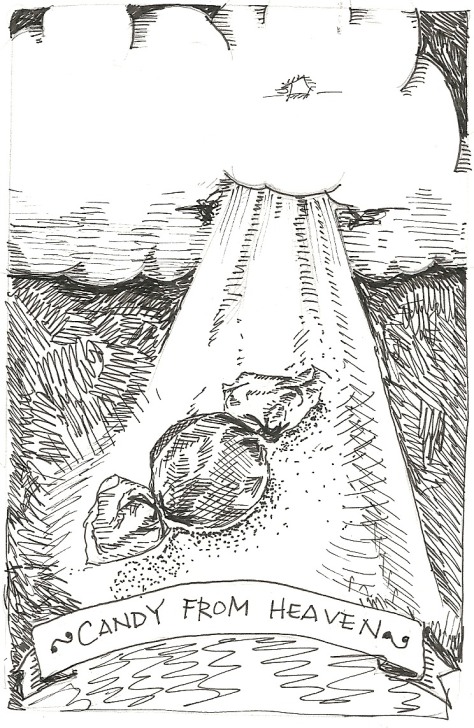 Hour 66 Artemis gives me pizza and offers me wine. I decline, because well: TRIGGER! Everyone says it will make you cave. But then I think I might as well face this demon as well, and have a glass. It’s a juicy little chianti and it goes great with butterscotch discs. Someone sings Judas Priest on American Idol and it is fucking fantastic.  Charlie Sheen is painful to watch but the best part is a shot of his girlfriend on a Cali Chronic magazine cover holding a bong and wearing a girl scout uniform (really!).

Jeff comes home and I am nervous because I know he has cigarettes. But  when he comes in it smells dusty and wrong. I feel pious and high on trash tv and several glasses of chianti. It is good to be with my friends and not think about when I can go outside and smoke. I drink water and pound wasabi peas and get ready to leave.

Hour 72 On the way to the car there is a sizable butt in the driveway I know Jeff has just left there. I consider picking it up. Twice. Then my brain says GROSS! and my brain agrees SUPER GROSS and I drive home without getting lost once.

I was inspired to keep this record by my good friend who also inspired me to quit, simply by deciding to do it himself. You can read his account here. I also did the illustrations, because at it turns out, drawing is a great pastime for your hands. At the time of typing this, I haven’t had a cig in 216 hours. Yay me.